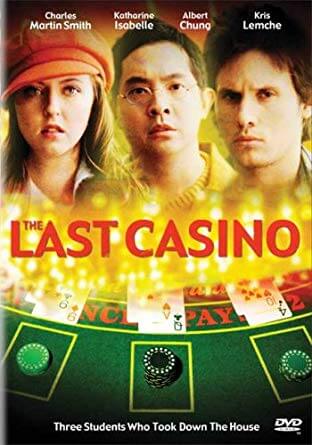 The Last Casino is a 2004 Canadian television film centred on the subject of card counting. This movie draws its inspiration from the book Bringing Down the House. The film was directed by Pierre Gill, and stars Charles Martin Smith, Katharine Isabelle and Kris Lemche.

The storyline is one that is of interest to every casino player and blackjack aficionado. A mathematics professor, Doug Barnes, is also a blackjack players at casinos in the area. He uses card counting to effectively improve his odds when playing the game and is just beginning to build up some winnings, when a casino security manager spots what he is doing and blacklists him. The security manager, Wilson, takes a photograph of Doug Barnes, and circulates it to all the casinos effectively blocking any further play. Casinos tend to frown on card counting as this reduces their profits substantially and known card counters are often banned.

This is a major setback to Doug, who is heavily in debt to his funder, Orr. Orr is furious with Doug for getting caught and cuts off a fingertip to motivate Doug to find the $40 000 he owes and pay it back as soon as possible. Doug suggests compiling a team to do the card counting in a way that will evade the security at the casinos.

Doug goes about creating a team of university students. He selects three students that he feels have the potential to manage the card counting requirements. There is George, who memorised pi to some 70 digits beyond the decimal, Scott, who has excelled at a series of memory tests and Elyse, a waitress with an extraordinary memory that Doug met at a pizza parlour. Doug begins teaching these three students the intricacies of card counting.

The Team Sets Out

When they are ready, and have mastered the art of card counting, Doug gives them each $1000 and sends them off. Needless to say, in the beginning things go along perfectly, and the students successfully begin winning money. As can be expected of a film in this genre, just when the system is working well and money starts pouring in, group interactions, greed and a need to show off begin permeating the team, threatening to scupper the entire plan and lose Doug the rest of his fingers.

There is no doubt over the efficacy of card counting. Perhaps the greatest poker player ever, Stuart Unger, was a savant at card counting and attributed his success to this ability. In fact, he won a bet on his ability to predict the last card after shuffling six decks.

Card counting involves careful accounting of the exposed cards that allows a player to deduct information about the cards still to be dealt. Players can make larger bets if they know there are many aces and tens left in the deck, as this improves their chances of getting blackjack. The blackjack card counting system assigns a point to each card rank, with one point for cards with values of 2 to 6, 0 points for 7 to 9, and -1 for 10 to Ace. Players mentally add up the total, and when the time is right, step in and wager productively.