If you fancy yourself as a hopeless romantic, then Starlight Kiss is the perfect online slot to try out. Powered by the Microgaming software platform, this slot features 30 paylines that are spread out across five reels.

There’s an unmistakable theme of love and romance that is consistently portrayed throughout the game and its graphic design is reminiscent of Mills & Boon and other paperback romance novels.

Starlight Kiss sets the scene in a beautiful rose garden, where all the romance takes place under a starlit sky. The five reels are housed in a gilded frame which houses a collection of well-crafted reels symbols that feature charming characters who are sure to beguile even the most cynical of hearts.

The set up of the game’s interface is quite simple and maintains a classical romantic feel that complements Starlight Kiss’ overall theme. Players who land winning combinations will notice short, heart-warming animations of rose petals tumbling gently across the screen. There’s also a melodic soundtrack that accompanies the gameplay and adds to the romantic atmosphere of this video slot.

On the reels, players will find theme-related symbols that each have different values attached to them. The traditional playing card icons 10, Jack, Queen, King and Ace make an appearance on the reels and are considered to be low value symbols. They sport a simple yet unmistakable design and each symbol has a coordinating rose that matches the colour of the symbol.

The high value symbols are represented by a love letter, a box of chocolates as well as a beautiful female and her handsome male suitor.

If you find the star-crossed lovers locked in a passionate embrace, you’ve found the bonus symbol featured in Starlight Kiss. Landing a winning combination of bonus symbols will trigger the Romance Bonus feature.

If you’re looking for the game’s scatter symbol, make sure you keep an eye out for the symbol depicting a house. If you find three or more scatter symbols in any position on the reels during standard gameplay, you will activate the Free Spins Bonus feature.

The wild symbol is represented by the Starlight Kiss logo and will replace all other symbols on the reels with the exception of the bonus and scatter symbols. Wild symbols increase players chances of getting winning combinations on the reels. 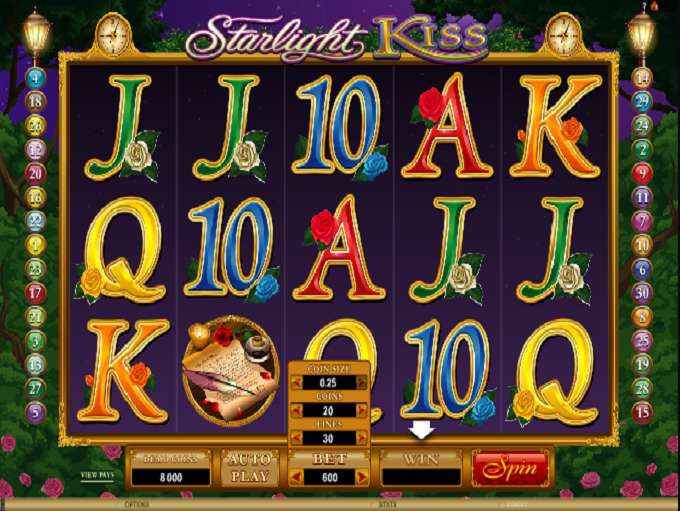 The Free Spins Bonus feature is triggered when three or more scatter symbols appear anywhere on the reels. Once the feature is in play, you’ll receive 14 free spins and any wins accumulated during the free spins round are automatically doubled.

This fun round can see players stack up their winning in a short space of time and can be re-triggered as long as more scatter symbols make an appearance during the bonus feature.

Players can only enjoy the Romance Bonus feature if they land the bonus symbol on the second, third and fourth reels. The bonus symbol is represented by the two lovers kissing. Once the feature is activated, players will be taken further into the moonlit garden, where they are presented with a selection of ten objects to choose from. Players need to make three selections and each object that they choose will reveal an exciting prize.